Isfahan is rightly one of the principal attractions of Iran and a vital part of my experience, not because of the magnificent palaces, the beautiful fire temple or the prominent mosques, but because I got to know M. & M. They offered me room and shelter in exchange for English language training. They were different from the other Iranians I had met so far. They were living full lives and tried to live according to the rules of their country. They were not overly religious, but they were believers, still.

Through them, I was confronted with Islamic propaganda, which led to some red faces, wide open eyes and laughter on my part. I was genuinely shocked. Here, I was asked if I believed in the Holocaust. Many things in Iran are turned into questions of faith. My indignant answer, my detailed description of concentration camps and the attempt to define what a fact was, were hanging in the air. As a defence of Iranian historians, experts were quoted and documentaries retold. Luckily, I spent most of my school days learning about the Holocaust, so I can easily describe the shape and size of the ovens and comment on similar details. When Fox News published a CIA document proving that the US thought that Hitler might be able to flee to South America, I got the chance to explain how to verify if newspapers wrote the truth. Because in Iranian papers the document was described as proving that Hitler had fled and therefore probably was still alive. I explained what a free press is, how to verify it, what a primary source is and how to find it. The hatred against Israel goes deep here and is actively fueled. Isfahan is not the only place in Iran where I am congratulated for being German, but here for the first time, I have counterparts who talk to me in confidence. I can ask follow-up questions. For both sides, this exchange is exhausting, exciting and horizons are expanding. It's exactly what I was searching.

M. is a goddess in the kitchen. She dominates traditional Iranian dishes like a pro. They are often so sour that I can hardly suppress a pinching of the eyes. She explains the names and ingredients to me, but they are hard to remember. So little of them sound familiar. Farsi bends my tongue into knots. Thankfully you can survive Iran with a mix of different languages. Words such as "Salam" (Arabic) and "Merci" (French) allow minimal polite conversations with the locals. Should I come back, I would learn more bits and pieces of the language in advance (and take a man with me, an essential accessory, unfortunately.)

Isfahan is a treasure chest of painted domes that amaze me. From one of the palaces, I come out with the firm conviction that I will one day create such a painted ceiling. The flowers and tendril patterns are beautiful, symmetrical, but always broken up. The symmetry is hidden behind millions of different shapes. However, the palaces are usually not over decorated. The secret is, they are not decorated from top to bottom. In some rooms the walls are white and only the ceilings colourful, in others the decorations are replaced by shaded areas or more prominent forms. It's a dance, a balancing act. Once again, I realise that the true art of living lies in creating a balance of the powers that consume us. 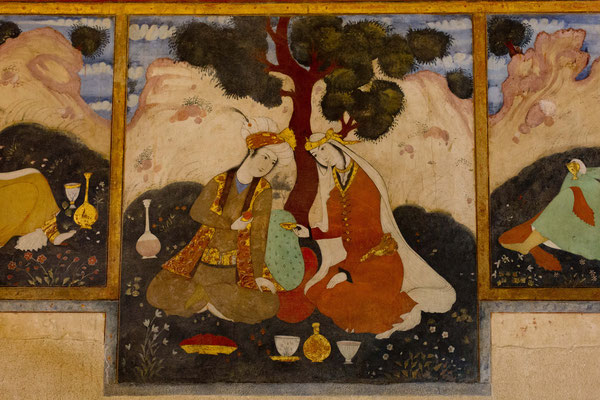 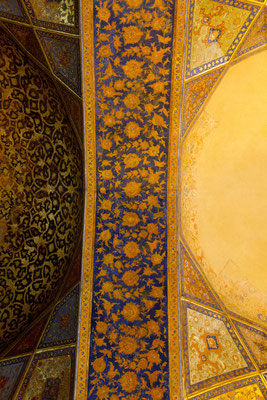 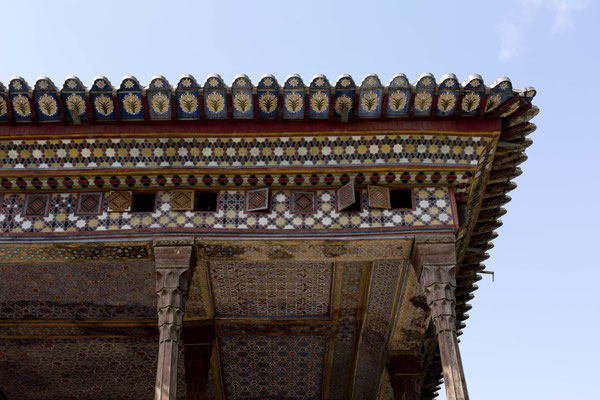 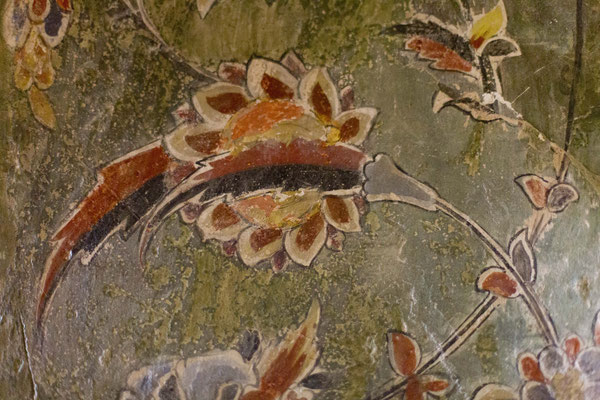 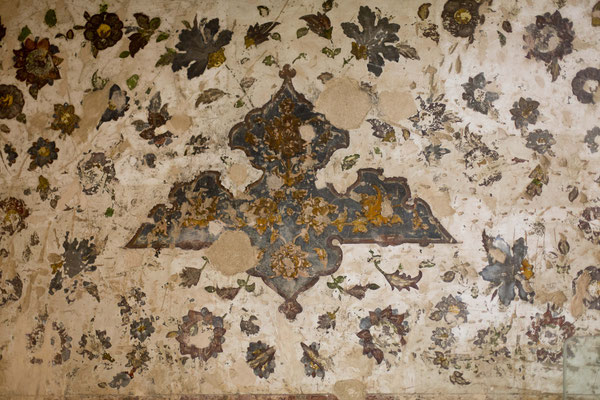 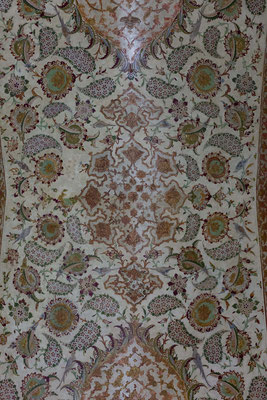 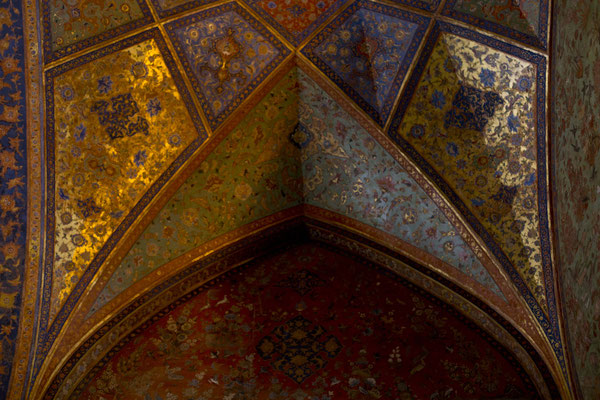 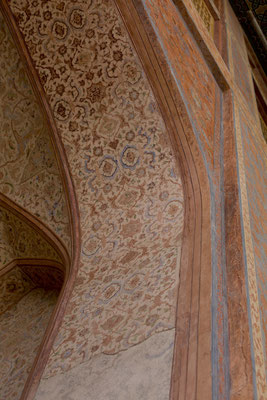 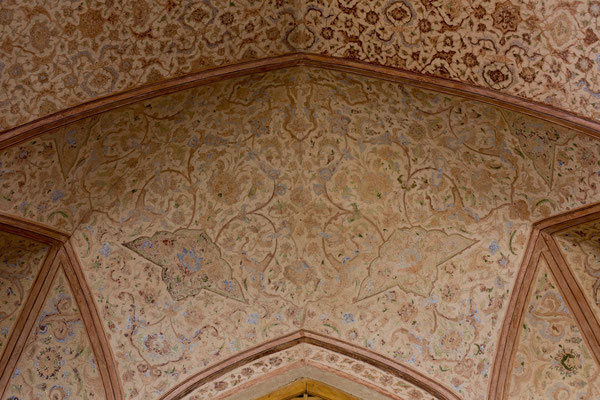 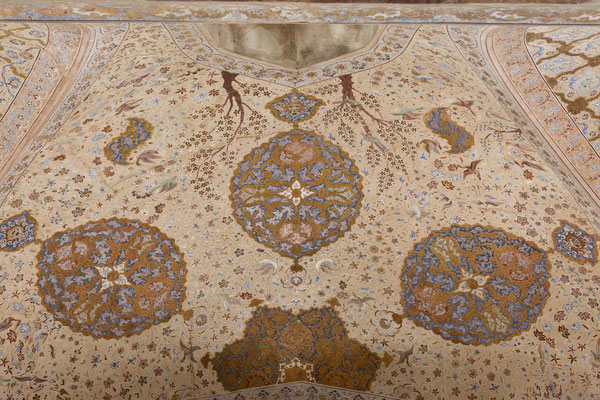 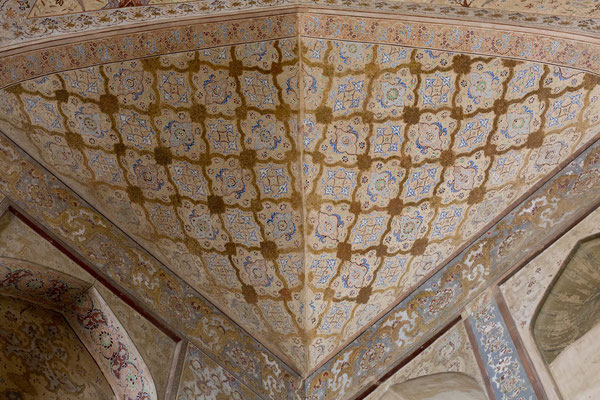 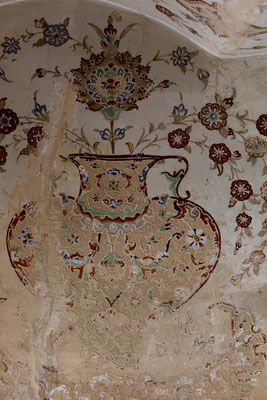 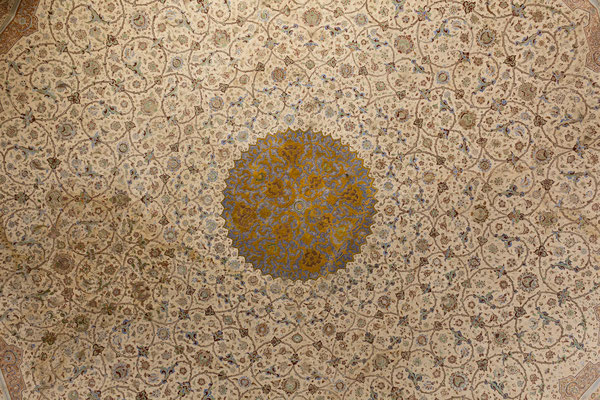 In Isfahan, I find a safe place to sleep next to a safe place to work. Here I book myself into the first co-working space of my life. My millions of photos are loaded into my Dropbox within a working day and Skype works fine. At first glance, this place seems to be very similar to its western counterparts. However, here too the rules are confusing. Although I received a handshake from the leader (which surprised me because I am not just a woman but also not a Muslim and ergo unclean), there is a booming laugh as I reach to shake the hand of another male member. Nobody wants to explain the difference. Somehow they seem to be ashamed. Otherwise, I can not make sense of their behaviours. For me, that's the most rude thing ever. If someone doesn't understand something, it should be explained to make it better next time. However, they seem so burdened with their imagined honour and their ideas of superiority that learning seems impossible. To me, incomprehensible. That's how it's always here in Iran. It frustrates me.